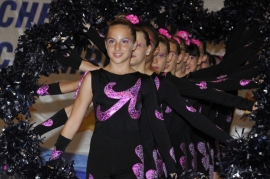 While you are sweating, jumping or perfecting your tumbling and getting better at cheerleading, creating new choreographies, ECA board members and member countries associations have also been quite busy preparing for the new season and also for the next ECC!

At the beginning of November, ECA President Mr Vojko Korosec visited the National Cheerleading Championship in Kazakhstan, to see what kind of a show friends from the East will prepare. According to the President, he had a great time and the Championship was a success. More information along with some photos are to be published on this website shortly.

Our Italian friends are already deep in their competition season! Their first cheer contest, Euroroma, is less than a few weeks away. Since they have so many news from cheerleading world, FICAD (Italian cheerleading federation) published a great online magazine. Although only in Italian, you can still get some idea of what all they’ve been up to. Even more, they already dedicated some of the magazine space to the ECC 2013! Check out more at http://cheermagazine.ficad.it/ !!

The last few months have also been quite busy for our Gibraltar friends – Gibraltar Rockettes! Teenies performed at the Strongman competition held in Gibraltar and Eurosport TV covered the event in full. The squad performed and cheered for the National Basketball team at the FIBA European Championship in August. But the most special was their performance at the private olympic themed night with special guests – olympians Roger Black and Steve Backley, just before the London Olympic Games 2012!