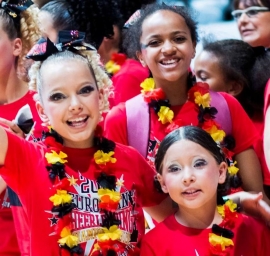 More than 2,000 cheerleader from from all over Germany fought for title.

On May 21 and 22, the 26th German Cheerleading Championship took place in Dresden. More than 2,000 of Germany’s best cheerleader had been received in the Saxon capital. This year, not only the German championship title, but also the qualification for the European championship 2016, which will take place in Slovenia in upcoming July, attracted the participants to the Margon-Arena in Dresden.

During the preceding local championships, nearly 160 teams in 21 different categories qualified for the German cheerleading championship. Intensive preparations for the championship hunt had been necessary, since only the top three in each category are entitled to participate in the European Championship taking place in the coastal city of Koper/Slovenia. All results can be found below.

“We were very delighted about the warm welcome and the support by the City of Dresden. We thank the Dresden Monarchs for excellent holding of the championship”, AFVD president Robert Huber had been satisfied. “We received only positive feedback from participants from all federal states, which we are happy to pass on to the City of Dresden”.

Our warmest congratulations to all old and new German champions, as well as to all teams that qualified successfully for the European Championship. Germany will send promising athletes to the European championship 2016 in Slovenia. We wish them all the best and keep our fingers crossed.