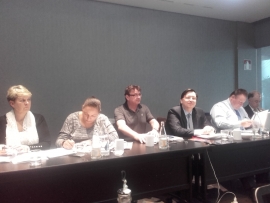 The Annual General Meeting of the European Cheerleading Association (ECA) was held on February
11, 2017 in Barcelona.

President Vojko Korosec welcomed 15 voting delegates from all member federations. In his report he underlined the importance of working jointly together to deliver the best possible service for the ECA member federations, as well as for the athletes participating in the European Cheerleading Championships (ECC). The ECC is the showcase event of ECA and the main reason for the existence of ECA.

Further reports were delivered from the Treasurer, ECC 2016 LOC, Education, Rules and Judge Committees. All reports were unanimously approved by the delegates. The AGM accepted the membership applications of Italy, Montenegro and Switzerland, raising the number of member federations now to 18 countries. More candidates are currently in the process of review so that ECA expects to grow further in the next few years. The ECC 2017 will be held July 1/ 2, 2017 in Zagreb (Croatia). Competitors should expect an high level competition.

For better organisation of daily work, the ECA Board announced that the Judge, Rules and Education Committees will merge to form a joint Technical Committee. ECA Judges Clinic will be delivered June 29 to 31, 2017 in Zagreb. Shadow judging can take place on July 1, 2, 2017 or at a later championship. Registrations for course attendees should be forwarded to the ECA office before the 1st March.

The AGM also receive a report about the upcoming Cheerleading World Championships on November 11/ 12, 2017 in Takasaki City, Japan. Takasaki City is located in Gunma Prefecture, approximately 120km north-west of Tokyo.

The Board informed that ECA was accepted as a member of DanceSport Europe (DSE), the continental association of the World DanceSport Federation (WDSF), tightening the strings between Cheerleading and DanceSport.

Overall, delegates left the meeting with very positive feelings for the future of ECA.